PowerCell has received a test order from Nikola Motor Company

Nikola Motor Company is a US based company that will build emission free trucks powered by fuel cells. The first trucks are scheduled for full production in 2021 and in November, PowerCell announced that the company was designated as the primary supplier of fuel cell stacks. PowerCell has now received its first test order of PowerCell S3, which will be installed in Nikola Motors test vehicles. Deliveries from PowerCell starting during the second quarter of 2018.

"With 1,000 horsepower and a torque of 2,700 Nm, these trucks will be stronger than any other semitrailer on the market today. Since they are run on PowerCell's fuel cells, the trucks will not emit anything but water", said Per Wassén, CEO of PowerCell Sweden AB.

"This is the first step, and while it is difficult to predict the extent of future orders we are optimistic and look forward to a cooperation that will continue to grow", said Per Wassén.

The PowerCell S3 fuel cell stack is based on industrial components and developed primarily for the automotive industry. One single fuel cell stack can deliver up to 100 kW and it is designed for mass production. 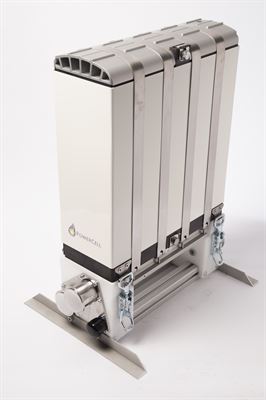