The leading fuel cell company PowerCell Sweden AB (publ)  has, together with Swiss Hydrogen, supplied a fuel cell system to Coop in Switzerland when the company launches Switzerland’s first distribution truck with fuel cell technology. The system is built on PowerCell S3 (http://www.powercell.se/wp-content/uploads/2016/04/PowerCell-S3-Datasheet.pdf).

"I am proud that our PowerCell S3 is in place. This is a big step and our strategic collaboration with Swiss Hydrogen is starting to give results. We are now helping Coop with completely fossil-fuel free transport," says Per Wassén, CEO of PowerCell Sweden AB.

The electric truck is adapted with a fuel cell system based on a PowerCell S3 prototype. PowerCell's partner Swiss Hydrogen has installed and developed the system (the order was communicated in January).

"Swiss Hydrogen is honored to deliver this first hydrogen fuel cell system for the Coop truck and is looking forward to further collaborations. The power density and efficiency reached with the integration of the S3 stack from PowerCell will certainly set a milestone in the zero emission delivery truck sector for the logistic companies", says Alexandre Closset, CEO of Swiss Hydrogen SA.

The need for climate-neutral transport has resulted in truck manufacturers and distributors starting to electrify their vehicles. Coop's is taking the next step by closing the hydrological cycle with the fuel cell truck powered by hydrogen. After tests are completed it is Coop's ambition to successively replace its entire fleet of vehicles with fuel cell operated trucks. Coop will also set up its own hydrogen gas stations alongside its distribution centres.

"We want to kick things off and help ensure that a pioneering technology succeeds", says Joos Sutter, CEO of Coop in Hunzenschwil.

"We receive many requests from the automotive industry because their end customers are demanding fossil fuel-free vehicles. A strong argument is that the fuel cells only waste product is water," says Per Wassén.

PowerCell S3 is compact and designed to easily be installed in a vehicle. It is specially designed for the automotive industry in order to meet the strict requirements of the sector. PowerCell S3 operates on hydrogen gas and has a high degree of efficiency which creates competitive advantage compared to other fuels. The stack is at 100 kW which corresponds to 134 hp. Due to the fact that the system is scalable, the stacks can be connected in series, and in this way produce a few hundred hp.

PowerCell Sweden AB has developed fuel cell technology for more than a decade and has completed a unique design, which enables production of a light, versatile and reliable source of power for cars, transport and stationary applications. Fuel cell stacks PowerCell S1, S2 and S3 cover the power rage of 1-100 kW.

Since April 2016 PowerCell has had a collaborative agreement with Swiss Hydrogen SA. Swiss Hydrogen has broad experience of design, assembly and of integrating the fuel cell system in various applications. The company has also cooperated with sales and marketing activities world-wide and the current hydrogen gas truck is an example of these efforts.

This information is insider information that PowerCell Sweden AB (Publ) is obliged to make public pursuant to the EU Market Abuse Regulation. The information was submitted for publication, through the agency of the contact person set out above, at 14:30 CET on November 4, 2016.

PowerCell Sweden AB (publ) is listed on First North at Nasdaq Stockholm and is an industrial spinout from the Volvo Group. G&W Fondkommission is appointed Certified Adviser by the Company. Among the largest owners are Midroc New Technology, Fouriertransform, Finindus and Volvo Group Venture Capital. For additional information, please visit: www.powercell.se

About Swiss Hydrogen SA
Swiss Hydrogen SA is a company that conceives, designs, assembles and integrates hydrogen technologies for numerous applications, such as, all sorts of electrical vehicles and small to large stationary power plants. Swiss Hydrogen believes that the expanded use of hydrogen will help to significantly reduce our dependence on fossil fuels, and will likewise permit us to slash our CO2 emissions. 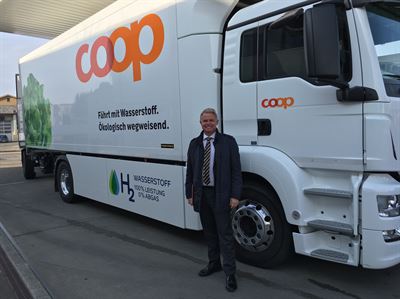