The leading Nordic fuel cell company PowerCell Sweden AB (publ) (http://www.powercell.se/) has decided to successively replace existing company cars and replace them with cars powered by fuel cells and hydrogen. First up is Director Marketing and Communication Charlotta Sahlin, who last Friday got her keys to a new Toyota Mirai.

It is becoming increasingly clear that the world needs to opt-out of fossil fuels. Should the international community live up to the UN climate agreement of Paris to limit global warming to 1.5 degrees, the world requires new solutions. One of these solutions is a fuel cell system operated by hydrogen.

PowerCell Sweden AB, the leading Nordic supplier of fuel cells, has decided to successively replace existing company cars and replace them with cars powered by hydrogen. First up is Charlotta Sahlin.

"When possible, it feels honestly really good to be able to drive a car that contributes to a development toward a sustainable society. A car that doesn't contribute to global warming. Water is the only emission from my Toyota Mirai!" says Charlotta Sahlin, Director Marketing and Communication at PowerCell Sweden AB.

The hydrogen car Mirai is equipped with fuel cells and manufactured by Toyota. Michael Brunnehagen is CEO of Toyota Motor Trend AB and presented the car keys to Charlotta Sahlin last Friday.

"We have been committed to sustainability for a long time, not only when it comes to cars. We have a genuine interest of making our facilities sustainable and we were also involved in establishing the hydrogen station that recently opened in Mariestad", says Mikael Brunnehagen.

The first filling station for hydrogen in Gothenburg was inaugurated in 2015 in connection with PowerCell's headquarters in Hisingen.

The efforts to buy into hydrogen-powered cars are strategically important, but have a limited impact on the company's results.

PowerCell Sweden AB (publ) is listed on First North at Nasdaq Stockholm and is an industrial spinout from the Volvo Group. G&W Fondkommission is appointed Certified Adviser by the Company. Among the largest owners are Midroc New Technology, Fouriertransform, Finindus and Volvo Group Venture Capital. For additional information, please visit: www.powercell.se 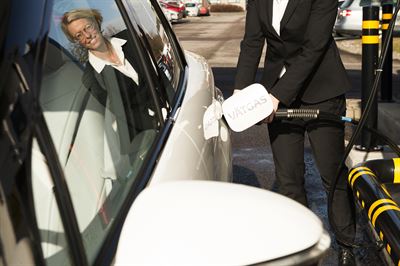